Arlindo de Oliveira makes a living by infiltrating Amazon Basin communities, buying up riverside land, then getting compensated when a new dam is built.

Arlindo de Oliveira worked 30 years as a bricklayer in the state of Paraná in southern Brazil. Now, he’s found a new job in the Amazon. He buys up land in the path of proposed hydroelectric dams in order to get relocation compensation from the companies building them.

According to Oliveira, he’s already on his fourth such business venture. This time, he has his eye set on the São Luiz do Tapajós mega-dam that will generate 8,040 megawatts of power and flood 729 square kilometers (281.4 square miles). The dam will cost US$ 9.2 billion, of which Oliveira hopes to get his small slice.

“There’s no better business,” says Oliveira, seated on the front porch of a house he built three years ago on two lots he purchased for US $48,600. Oliveira freely admits he moved to the town of Pimental in Pará state, just to get the settlement money from the power plant. The town — where close to a thousand fishermen live — will be totally flooded if the dam gets built. 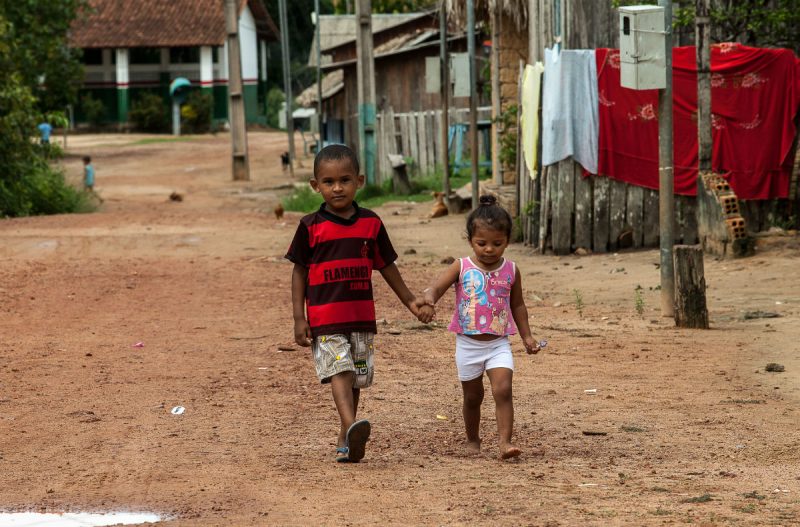 Children in Pimental, in the municipality of Trairão. Pimental’s entire population will be displaced by the dam, but no one knows so far where they will be moved to, or how they will be compensated for the loss of their homes and community. Photo by Lilo Clareto / Repórter Brasil

It’s all a bit of a gamble, since the ultra-controversial São Luiz do Tapajós project could get cancelled. The construction bid was scheduled to happen this summer. Then, in April, IBAMA, Brazil’s federal environmental agency (then overseen by the Rousseff administration), suspended the dam’s license. It remains to be seen what interim president Michel Temer’s administration will do about the on-again, off-again project.

The life of a barrageiro

Oliveira is someone traditional Amazon communities label a barrageiro: a speculator who infiltrates a community only to receive government relocation compensation for new infrastructure projects. But he takes offense at the name.

“I’m not a barrageiro!” declares Oliveira. “I buy up land where I know there will be a dam, and I sell it to the power plants. So I can get their money,”

While Pimental townsfolk organize themselves to try to halt construction of the dam, and are worried about the river, the forest and their futures, Oliveira wholeheartedly supports the project. He complains strongly about the construction setbacks, which place his get-rich-quick scheme at risk.

Maria Cecilia dos Santos, after chasing a small unruly chicken around her front yard, settles onto her porch. She explains what she likes best about living in Pimental: “It’s the neighbors. That one, that one, that one,” she says, pointing emotionally to the individual homes around her. At eighty years old, dos Santos has seen all the local fishermen grow up, and watched them as they went out each day to pursue their livelihood on the Tapajós River — a lifestyle that will likely vanish if the dam comes. 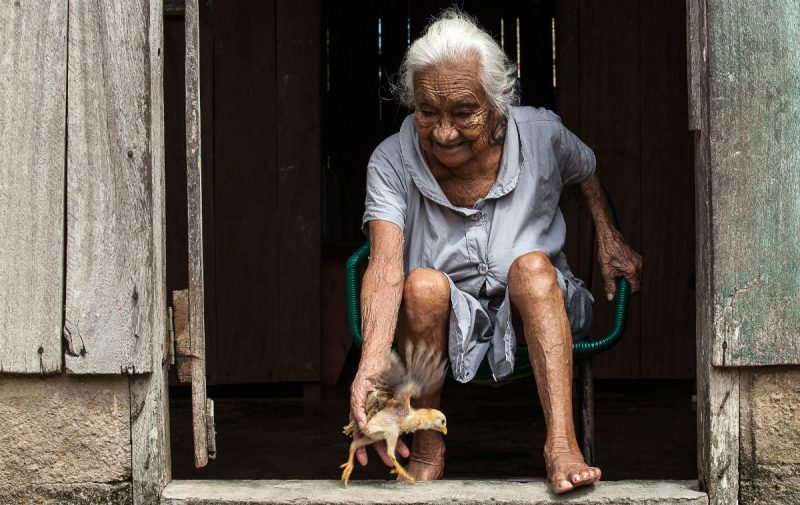 Maria Cecilia dos Santos says what she likes best about living in Pimental is her neighbors. Photo by Lilo Clareto / Repórter Brasil

On the wooden plank walls of Oliveira’s house hangs a map highlighted with Amazonian rivers. He proudly points out where he has made past deals. He claims to have been tipped off by friends working for the construction companies, and on the dam projects. Over the last eight years, he bought land on the Madeira River, in Rondônia state, where the Jirau and Santo Antonio dams were built, and along the Xingu River, in Pará state, where the Belo Monte hydropower plant now sits.

Oliveira brags that he has been compensated more handsomely than the traditional riverside inhabitants, many of whom have families that have lived for more than a century in the towns that ended up underwater.

He says that he has made more than US $400,000 in profit so far. He boasts that he used the money to buy a beach house in the much sought after seaside resort of Florianopolis, Santa Catarina. He hopes to make up to US $1.7 million from compensation received for his land on the banks of the Tapajós River, his biggest score to date. He has spent money on cattle, diversified crops and fishponds in order to help inflate the dam consortium resettlement offer. 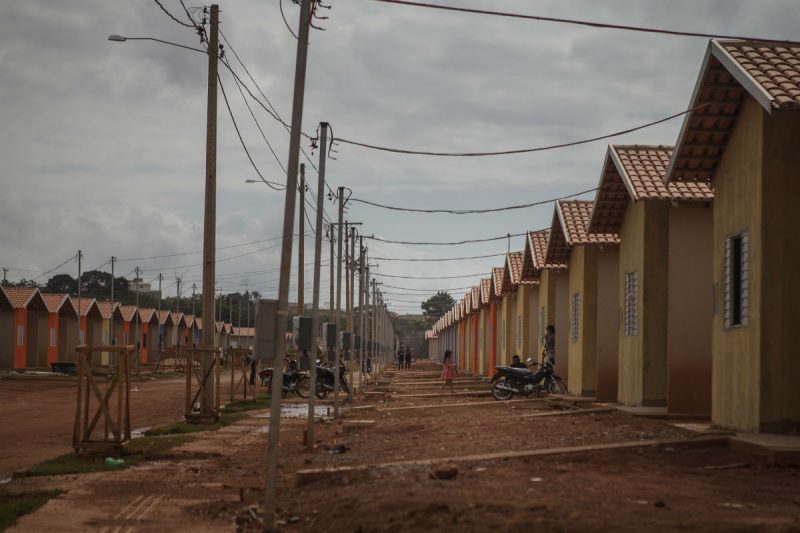 Families displaced by the Belo Monte dam have yet to be compensated by the construction companies as required by law, and are now living in poor neighborhoods on the outskirts of Altamira. Photo by Marcio Isensee e Sá / Repórter Brasil

“Wise to the game”, he claims to know all the tricks of the trade for increasing the amounts paid out by dam builders. He points to the land beyond his veranda: “This space here is worth more than the house!” he gloats. “I came from Altamira, where Belo Monte is located, to buy land here for when the [Tapajós] dam goes up. So, they [the builders] already know me. I have the land; they know who I am. They show up and it’s a done deal!”

Pimental and other long established Tapajós river communities aren’t only worried about the dam being built. They’re also concerned that the promised imminent domain compensation, and pledged funds to mitigate social and environmental impacts, won’t be honored. That’s exactly what happened at Belo Monte where intense criticism has been directed by NGOs, social movements and the Federal Attorney General.

Even though the Belo Monte dam is now in operation, the Eletro Norte Consorium that built it has yet to meet the mandatory US$ 1 billion compensation commitments it made to Altamira residents — including nine indigenous groups — as a condition for being granted the dam contract by the federal government in 2011.

But even as the leadership in Pimental try to organize local fishermen to resist the government’s and consortium’s plans, others, including Oliveira, try to convince the locals that the dam is actually good business. More than that: it’s inevitable.

“In Itaipu there was no way the power plant was going to be built,” recalls Oliveira. “The Guaíra Falls was the most beautiful waterfall in the world, with water freefalling for 45 meters. But they said there would be a [power] plant, and that was that!” The dam was built, and Guaíra Falls, a natural wonder, was destroyed.

From bricklayer to speculator

Arlindo de Oliveira left his family’s farm when he was 19 years old. He worked as a bricklayer and carpenter for three decades, often on hydro plant construction. His first job was on the Itaipu dam, then the largest of its kind in the country.

At that time, Oliveira says, he paid close attention to the process by which the power plant companies awarded land compensation concessions. According to him, it was then that he got close with several construction company middle managers. In less than 10 years, he put his moneymaking scheme into action.

He moved his family to the Amazon, the main source of Brazil’s energy. “I lived in Cascavel [in Paraná state], and worked at Itaipu. I saw other guys selling land that would be flooded, and it was a fair amount of money. So as I got older I thought about doing something like that,” remembers Oliveira. “Jirau was where I stayed the longest, two years. I was in Santo Antônio for a year and three months. In Altamira, for three months. I bought a piece of land, and in eight months I was out. I managed to plant 2,600 orange and lemon trees, and lots of yucca and corn,” he adds. Today, those plantings — for which he was well compensated — are underwater. 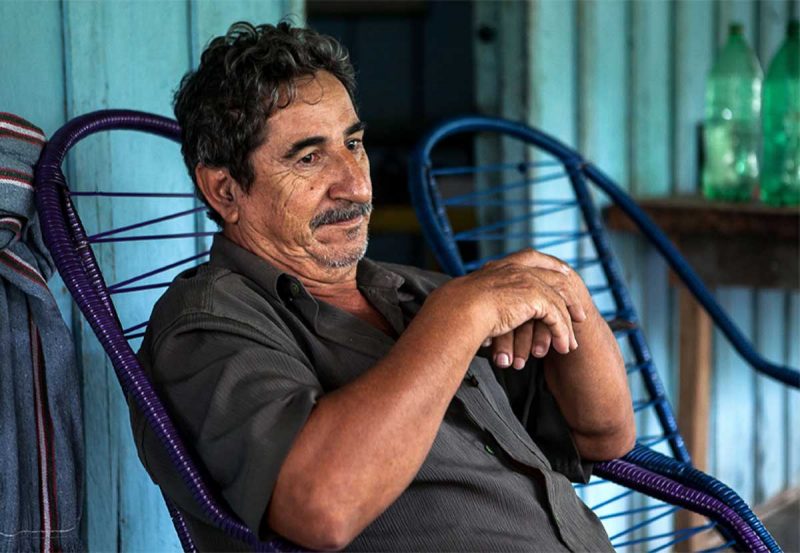 Arlindo de Oliveira on the front porch of the house he built in Pimental. He expects to get rich from his São Luiz do Tapajós dam land speculation. Photo by Lilo Clareto / Repórter Brasil

Oliveira’s biggest wager was on Pimental and the São Luiz do Tapajós dam. But that’s where his business “went sour.” Land title irregularities have surfaced, followed by successive corruption reports which last year resulted in the sacking of the local head of INCRA, the federal body responsible for land reform and family farmer support. It appears that Oliveira and other Pimental residents may be holding land documents, which at the end of the day, won’t be worth anything.

“A lot of people will be broken because of this. There will be a hearing to try to sort it out, but everything might end up underwater,” says Oliveira. According to him, one of his farm-owning ‘friends’ hoped to receive compensation of US $1.4 million for his land, but then discovered that his titles were not free and clear.

Oliveira claims that he hasn’t come across any other barrageiros in Pimental. “In Altamira, I managed to come across more than fifty,” he compares. Some of the Pimental townsfolk say he is working to convince them to accept the hydroelectric power plant. “I’m very much in favor of the dam,” he declares wherever he goes.

Gilberto Cervinski, the national coordinator for the Movement of Persons Affected by the Barrier Dams (MAB), an NGO, notes that Oliveira’s type of “speculation” is just one of many problems traditional communities face during the relocation process.

“This happens all over, where[ever] the dams are built. There is even a network of lawyers linked to the companies paying compensation, which end up with up to 30 percent of what the riverside inhabitants might receive. This [for example,] happened with the Santo Antonio power plant in Rondônia,” explains Cervinski.

The MAB coordinator agrees that such speculators are generally more savvy, and understand better how to increase the value of their lands up for compensation, than do local people. The handsome payout speculators end up receiving also can convince other riverside inhabitants to accept construction of the dams more easily. 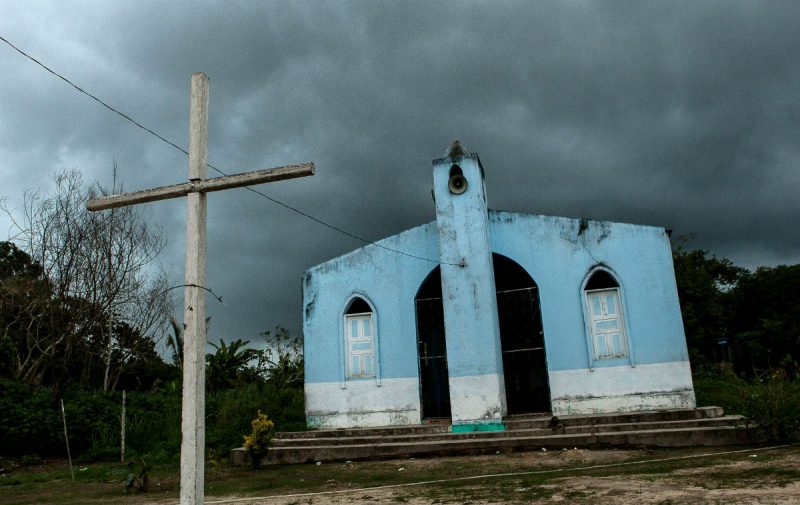 Families displaced by the Belo Monte dam have yet to be compensated by the construction companies as required by law, and are now living in poor neighborhoods on the outskirts of Altamira. Photo by Marcio Isensee e Sá / Repórter Brasil

“It’s an ideological fight. The companies use these schemes against those affected [by dam construction],” says the MAB coordinator. “The barrageiro, who is friendly with the company, receives good compensation and spreads the word that if those affected maintain ‘good relations’ and don’t organize against the dam, they will receive more.” Cervinski believes that the barrageiros also act as informants in the traditional communities, serving the power plant construction consortia.

Oliveira says he cares about the people of Pimental, to a point. He tells how he uses his 4×4 truck to drive townsfolk into the city of Trairão when they need to go to the doctor, or to take care of other necessities. He considers himself a good neighbor, but he also doesn’t hide his desire to leave.

“We end up getting close to the land, to the animals, to the plants, but when it gets there [points at the doorway], it’s all over. Nothing can be done. Dealing with the government won’t help. If the power plant has been decreed, no native groups can stop it. Nobody can stop it. It is going to get built,” he states.

Asked whether his years of dam compensation speculation have been worth it, and whether he has made the money he hoped for, Oliveira responds: “I’m not going to get rich. But why just stay in one place? I want money because I know where I’m headed: I’ve already bought up the area,” the barrageiro concludes with a mysterious look, and without any explanation as to his final destination. 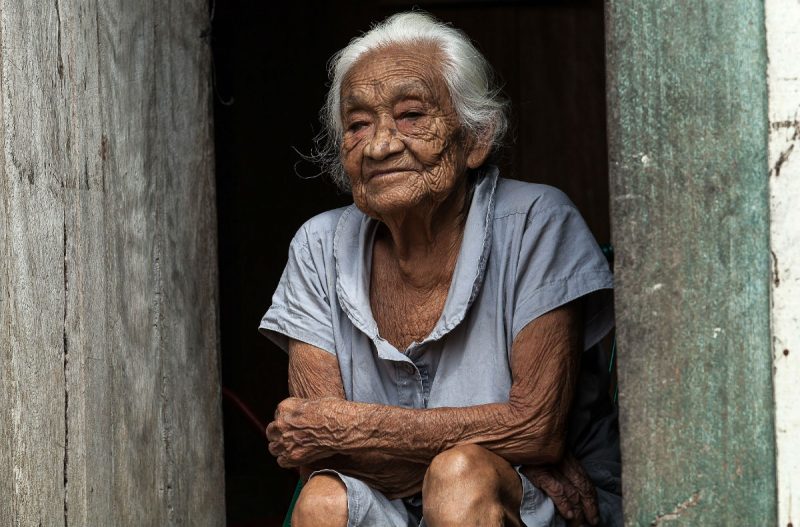 Maria Cecilia dos Santos and her Pimental neighbors will lose their homes and community if the São Luiz do Tapajós dam goes forward. Photo by Lilo Clareto / Repórter Brasil