Database consolidated during the second stage of project Eles Mandam (They Rule, in Portuguese), launched on Wednesday (18), provides transparency on a number of direct and indirect relations among large economic groups within Brazil’s economy.

The information allows identifying corporations’ tentacles and pointing out rarely seen links that may bring together a large bank and a large mining company, a health insurance company or a clinical analysis business group. 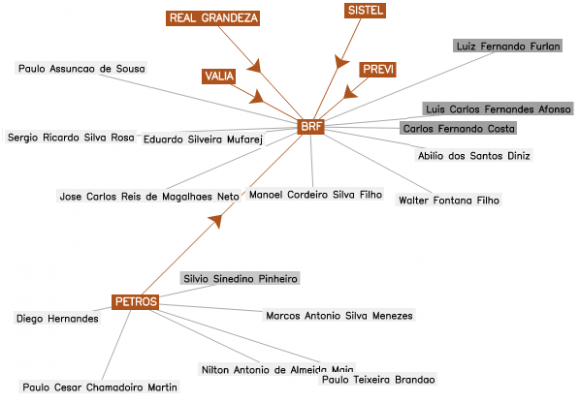 Another novelty is the expansion of profiles for important board members of those economic powers. It allows evaluating their educational and professional training, which is yet another valid tool to check relations among people,economic groups,and the State, as well as how they interrelate.

Extensive research conducted by Repórter Brasil on companies’ websites, balance sheets and official reports resulted in names and profiles of people sitting in their Boards of Directors. The research covered the 100 top companies, the 50 largest business groups and the ten largest pension funds.

Eles Mandam is a Repórter Brasil initiative supported by Friedrich Ebert Foundation. It was inspired on They Rule, which shows board members forthe largest U.S. companies and allows identifying their networks of relations. The Brazilian version was produced under permission of those in charge of the American platform. It also include sproperty and control relations among businesses.

Economic sectors
The project coincides with increasing consolidation in several manufacturing, finance and agribusiness sectors. The map of the financial sector has changed significantlysince the adoption of Plan Real in 1994. The country had 241 banks earlier in the Real period; they are now fewer than180. The arrival of new forces such as HSBC and Santander in the last 15 years coincided with the increased scale of national groups, resulting from the sale of state-owned banks by governments, economic difficulties experienced by smalle rbanks or the search for larger scale.

Bradesco, for instance, has acquired several institutions: BCN in 1997; Banco do Estado da Bahia in 1999; Banco Espírito Santo in 2002; BBVA in 2003; Agora Corretora in 2009. Itaú did not lag behind and announced the largest operation of the sector: in November 2008, it communicated the “merger” of its operations with Unibanco, thus creating Itaú Unibanco.

In the services industry, higher scale has also been strengthened in order to increase revenue, reduce costs and expand nationwide presence, especially in the Northeast, where income has been growing by two percentage points above the national average. In the super and hypermarket segment, the level of concentration as measured by the five largest companies’ share in total turnover is higher than 40% and is likely to continue growing due to the increased volume of investments in organic expansion and acquisitions.

Infrastructure sees two clear movements. One is led by large Brazilian construction companies that have expanded their action beyond the construction of enterprises and entered the field of concessions, such as road and subway lines, or hold shares in energy companies. By acting on this connection, they increase margins and gain revenue predictability during contracts, facilitating their dividend policy and their possibility to obtain funding.

The agribusiness sector might experience strong consolidation over the coming years, maintaining the trend seen with the Sadia-Perdigão merger and the expansion of Friboi. A wave of consolidation in the ethanol industry could emerge over the coming years, with large groups becoming even larger. But that may coincide with higher government presence through BNDESPar, which can become a shareholder in other ventures. The industry’s debt is now one of the major bottlenecks faced by plant owners.

This concentration process is clear in some sectors, but it raises questions: Will it be good for consumers? Will it really result in lower consumer service prices? Will Brazilians who improved their living standards become even more demanding regarding services – whether they are provided by public utilities concessionaries or by health insurance companies? Will companies be prepared to meet these new demands? What will their main challenges be over the coming years? These are some of the issues arising from the consultation of data available on platform Eles Mandam, now available in its second stage.

Report by Roberto Rockmann; production and research by Hélen Freitas. The platform was developed by Tiago Madeira. Edition by Leonardo Sakamoto and Marcel Gomes.

Eles Mandam can be accessed here.