Investigation revealed that U.S.-based companies bought timber from Brazilian traders that sourced forest products from several sawmills in the Amazon

Products derived from timber extracted by workers living in conditions analogous to slave labor in Brazil are connected to a complex business network linked to the U.S. market – possibly reaching the shelves of large retailers and being used in renovation of landmarks – according to a new investigation conducted by Repórter Brasil. After purchasing from suppliers held liable for that crime by the Brazilian government, local traders exported timber to companies like USFloors, which supplies the retail chain Lowe’s, as well as Timber Holdings, which supplied timber for construction projects at Central Park and Brooklyn Bridge in New York.

The commercial network linking retailers to sawmill companies was identified by a three-month investigation and confirmed by the companies. The wood products were mixed at Brazilian intermediaries, so the investigation was unable to track the exact destination of each piece of wood. However, its findings reveal that large retail and construction groups are sourcing the product from companies whose supply chains are contaminated by the alleged use of criminal practices, with the conditions of workers rescued from sawmill sites aligning with slave labor practices as defined by Brazilian law. 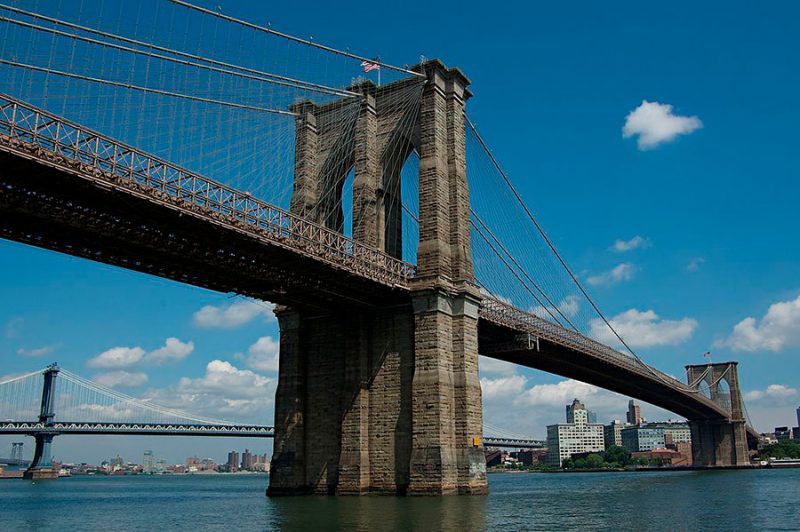 The cases investigated by Repórter Brasil began at sawmill companies based in the state of Pará – an important hub for the timber industry in the Brazilian Amazon. One of them is Bonardi da Amazônia, a sawmill company that recruited nine people who were rescued from conditions analogous to slave labor exploitation in October 2012. The workers were located by the Brazilian Ministry of Labor and Bonardi da Amazônia was formally held responsible for the crime.

The investigation found that workers slept in shacks in the forest at night, in makeshift facilities made of logs removed from the forest itself and covered with tarps, 110 kilometers (over 68 miles) from the nearest town. There were no walls to protect them from the dangers of the forest such as snakes, scorpions and even jaguars. They bathed and washed their clothes in a stream shared with local animals; there was no bathroom. The workers had no formal contracts and told investigators they were paid based on their productivity.

Because of the degrading accommodation and hygiene conditions found by Labor Ministry inspectors, Bonardi da Amazônia was held responsible for using slave labor in accordance with the conditions for that crime outlined in the Brazilian Criminal Code.

Between August 2012 – two months before the crime was discovered – and July 2015, Repórter Brasil found Bonardi supplied timber to Tradelink Madeiras, a company belonging to the London-based Tradelink Group. One of the companies that buys wood products from Tradelink is USFloors – a leading floor manufacturer for the North American market. Tradelink confirmed the commercial relationship by email and, in reply to Repórter Brasil, stated that field inspections were conducted at this supplier but no labor irregularities were found at Bonardi da Amazônia in June 2012. That is, the Bonardi site was visited by Tradelink employees four months before criminal activity was uncovered by labor inspectors.

In justification of its business dealings with a sawmill held responsible for slave labor practices, Tradelink maintains that Bonardi pledged to change its labor conditions. According to Tradelink, the decision to continue purchasing from Bonardi was based on an agreement the company signed with the Ministério Público do Trabalho – an independent branch of Justice in Brazil (see Tradelink’s response).

When contacted by Repórter Brasil, Bonardi asserted that it met all authorities’ requirements (see Bonardi’s response).

Bonardi remained a supplier for Tradelink until July 2015, even after the sawmill was included in the government’s “transparency list” in March of that year. The list discloses the names of companies caught by the federal government engaging in working conditions analogous to slave labor. Companies are included on the list after the Ministry of Labor completes an administrative procedure on the results of inspections, which guarantees the right of defense to those held responsible.

The “transparency list” is used by several companies that have formally committed to fighting slavery in their supply chains. It was disclosed by the Ministry of Labor at the request of Repórter Brasil and the Institute of the National Pact for the Eradication of Slave Labor (Inpacto) through the Access to Information Act (see its latest update here).

Tradelink Madeiras’ products have international reach. In 2015, one of its clients in the United States was wood flooring producer USFloors. Its products have been sold by the retailer chain Lowe’s – the second-largest construction material chain in the U.S. Lowe’s has more than 1,700 stores in the country and also operates in Mexico and Canada.

“I personally went to Tradelink factory in Brazil and we felt that among other factories we visited, Tradelink was the only company with adequate procedures for due diligence to ensure compliance with local and international regulations,” said Philippe Erramuzpe, chief operating officer of USFloors. He added that all of the company’s suppliers are required to “certify that the material is not harvested in violation of any local laws or requirements” (see USFloors’ full statement).

Repórter Brasil tried to contact Lowe’s by telephone and email several times, but the company did not respond.

Another regular client of Bonardi da Amazônia, from 2012 to the present day, is Ronardi Comercial Exportadora de Madeiras, a Brazilian trading company based in the state of Paraná. Its clients include U.S. companies such as Timber Holdings USA, a wood flooring manufacturer that has supplied raw material for major urban projects such as the Atlantic City Boardwalk in New Jersey, restoration of the Brooklyn Bridge, and construction projects in Central Park.

Many of these projects include the use of the Brazilian ipê, or Brazilian walnut (Handroanthus spp). With its colorful canopy, this tree stands out in the forest. But with a high value in the market, the ipê is ever more difficult to find in Brazil. It is the same type of timber that Timber Holdings purchased from Ronardi in 2016, and which Ronardi has also purchased from Bonardi.

In a statement obtained by Repórter Brasil, Ronardi stated it “vehemently repudiates any violation of labor laws.” The company says it requested clarification from Bonardi on the issue and reproduced the company’s statement in which Bonardi mentions to have improved working conditions and has no pending labor issues. (See Bonardi’s and Ronardi’s full statements).

“Our company is completely against any kind of slave labor and illegal timber trade, and it should be noted that Timber Holdings was one of the first companies in the world to invest in an outsourced audit for every shipment of timber imported from Brazil,” Timber Holdings said in its statement. According to the U.S.-based importer, no shipment of timber is approved if a company with which it is dealing is listed on the Brazilian government’s “transparency list.” Timber Holdings stated it conforms to this standard at every stage of the supply chain, from the source to the direct seller. (See Timber Holding USA’s response to Repórter Brasil).

Another supply chain investigated by Repórter Brasil revealed links between slave labor exploitation and Tramontina, one of the largest manufacturers of kitchen utensils in Brazil. The group’s products are sold to the nation’s top retailers, including Brazilian Walmart stores.

The case begins with Madeireira Iller, a company held liable for using practices analogous to slave labor in December 2012. The Brazilian Ministry of Labor rescued 31 people who worked in the processing, cutting and transportation of native wood for the company, in the city of Santarém, Pará.

Workers were living in similar conditions as those in the Bonardi case and most other cases linked to slave labor in the industry: tarp or straw shacks with no walls, meals prepared below minimum hygiene standards, no toilet, and water taken from the local stream.

Although they worked in an occupation in which the risk of accidents is high, Madeireira Iller workers were not wearing protective equipment at the time of their rescue, had no formal contracts, and their earnings were based off their productivity. They were not guaranteed the legal minimum wage – it all depended on the number of trees they harvested.

According to the Ministry of Labor, the company’s owner told 23 of the people working at the facility to flee and hide from inspectors, allegedly to avoid being caught committing violations. The inspectors’ account states the workers were forced to hide in the forest for five days.

Three years after the inspection, in 2015, Madeireira Iller was charged with environmental crimes and the company’s owners arrested. The government operation “Clean Wood” dismantled an operation allegedly engaging in illegal logging and land grabbing. Madeireira Iller was fined over $578,000 for having timber stored without proof of legal origin as well as for entering false information in the official forest control systems.

Repórter Brasil contacted Írio Luiz Orth, a member of the family that owns Madeireira Iller. According to labor inspectors, he was the primary representative in charge of the company’s administration when the slave labor case took place. However, Orth declined the request for an interview.

As with Tradelink and Bonardi, Tramontina’s press office stated that consultants personally assessed the supplier’s labor conditions in 2012 – the same year in which slave labor was found by the Ministry of Labor. The company reports that an internal evaluation showed a reality that is quite different from the one observed by federal inspectors: “During visits by Tramontina’s staff, it was possible to see the existence of eating facilities, accommodations, uniforms and personal protective equipment. In case there were workers in other places, the company was not aware of it,” the company said in a statement issued to Repórter Brasil.

Madeireira Iller continued supplying Tramontina until June 2015, according to Repórter Brasil’s investigation. The supplier was excluded only after it was found that it “probably processed timber from some legal projects and from other projects of dubious origin,” according to Tramontina’s statement.

Three months before that, however, Madeireira Iller had been included in the government’s slave labor “transparency list.”

When asked by Repórter Brasil if Tramontina used the “transparency list” when monitoring its suppliers, the company claimed that it does.

“We have always used it and will continue to use it,” said a company representative. Tramontina stated that from 2016 on, it started updating the records it provides for the de-accreditation of suppliers found to be involved in slave labor practices and environmental crimes every three months instead of the previously used six-month period.

Walmart, as well as two other retail groups in Brazil – Carrefour and Pão de Açúcar – have also pledged to restrict their business with companies included in the “transparency list.” They are signatories of the Brazilian Pact to Eradicate Slave Labor, a multistakeholder initiative created 12 years ago advocating this kind of restriction. As the three of them are all Tramontina clients, Repórter Brasil asked for their stance on the case. Carrefour says it rejects any form of labor similar to slavery or any practices that are not in accordance with environmental legislation. Walmart and Pão de Açúcar underscored that Tramontina had already taken steps to exclude Madeireira Iller from its supply chain. (Read the full statements from Tramontina, Carrefour, Pão de Açúcar and Walmart.)

Note from Repórter Brasil (March 18th): The link to the most recent version of the “Transparency List” was updated in March 18th.